Female-owned businesses in Vancouver are booming. Our city ranks 11th on the Dell Global Women Entrepreneur Cities (WE Cities) Index, the second highest Canadian city after Toronto. This index ranks cities based on “the impact of local policies, programs and characteristics in addition to national laws and customs to help improve support for women entrepreneurs and the overall economy.”

Business in Vancouver recently listed their top 20 biggest businesses owned by women. The metric biggest is defined by number of employees at the company. Check out the top 10 companies and what they do here: TPD, a staffing agency out of downtown Vancouver, grabbed the number one spot with an impressive 1,150 employees in British Columbia. Their brand name reflects their former company name, The Personnel Department. TPD specializes in HR consulting, talent recruitment services and temporary staffing and have been operating since 1980. The majority owner is Leslie Meingast. Macdonald Real Estate Group came in just barely second with 1,100 employees in British Columbia. MREG was founded in 1944. Lynn Hsu, the CEO, bought the company in 1990 when it had only once office and has since expanded it to over 20 offices in BC. In 2015, MREG opened an office in Shanghai to connect with international buyers and investors. The company offers services in all aspects of real estate, including buying, seling, property management and project marketing. SimpeQ Care has 715 employees in 2019, and is owned by Gerry Clayford-Beckie. The company provides staffing, services and administration for seniors facilities. The company operates in three locations: Burnaby, Maple Ridge and Delta. CEFA runs early childhood schools for children 1-5 that focus on developing a child in all aspects, not just academically. They offer activities and lessons in everything from core subjects to drama to yoga. They have 21 schools, most of which are in Greater Vancouver. The founder is Natacha Beim, who opened the first CEFA school in West Vancouver when she was 26. Purdy’s is one of the more well-known consumer brands on the list. Purdy’s Chocolatier has a  57,000 square-foot facility in Vancouver to produce chocolates for all of its 75+ retail locations. Purdy’s is known for the sustainably sourced cocoa and wide variety of chocolates and confections. CEO Karen Flavelle has been the sole owner since 1997 after purchasing the company from her father. The Capilano Group is known for its ownership of the Capilano Suspension Bridge, undoubtedly one of the most famous tourist spots in Vancouver. They also own two other travel / tourism businesses in Vancouver, the Stanley Point Pavilion and Prospect Point as well as other lodges and food and beverage establishments in B.C and Alberta. Nancy Stibbard purchased the Capilano Suspension Bridge Park in 1983 and is the owner and CEO of the company. Saje is a well known aromatherapy brand in Vancouver that is famous for their natural ingredients and environmentally-conscious ingredients and packaging. They sell essential oils and skincare products in their 80+ stores across North America. The company was founded in 1992 by Kate and Jean-Pierre LeBlanc. TM Events and Promotions is a Port Coquitlam based company that provides event planning, promotions, live entertainment and other services. It was founded in 2001 and is currently owned by Jessica Lowen. The Lazy Gourmet has been around since 1979 and has 180 employees. Susan Mendelson is the majority owner of the catering business, which also does event planning. The Lazy Gourmet is known for their local and sustainably sourced dishes and has catered to groups and companies of all sizes. Claire Newell is a well-known Vancouver based travel journalist and owner of Travel Best Bets. The company has 148 employees in British Columbia as of 2019 and helps travellers organize every aspect of their trip, from flights to accommodation to activities. 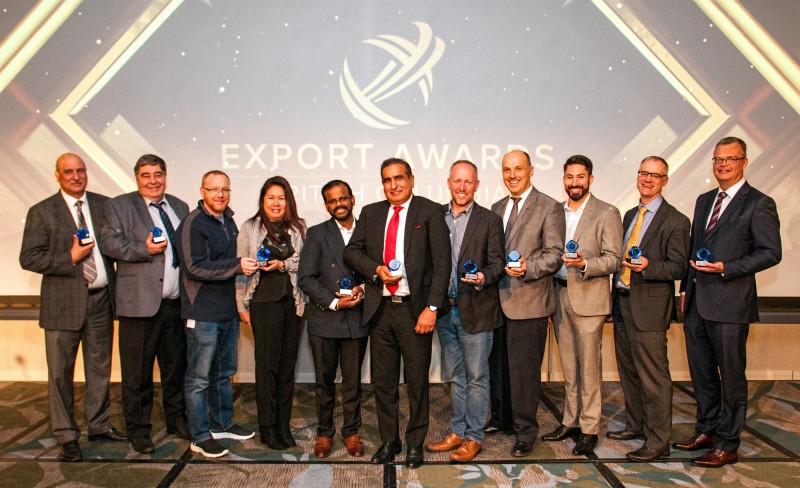 The 2018 BC Export Awards Winners The 2018 BC Food and Beverage Awards Winners Announced